Whatever you do his year don’t miss the displays in the Park Avenue Armory’s restored rooms on the second floor. Instead of the usual totally artificial spaces within the cavern of the invisible drill hall – invisible except from the second floor landing – you have ancient antiques in just restored American antique spaces the changing rooms of the old Armory. (The Armory was named in 2000 among the “100 Most Endangered Historic Sites in the world by the World Monuments Fund www.armoryonpark.org.) And when you have just sculpture to present you can do it with double the impact – and that incredibly focused unobtrusive Dutch lighting structures.

To start this year’s show off at the top go to the far north end of the second floor. There, tucked away in a corner, you’ll find the work of Wallace Chan. Be prepared to gasp at the sheer size, and amount – and extravagance – of the materials Maitre Chan uses with seemingly casual abandon. Flights of fancy become flights of jewels held in space by his mastery of titanium – the mosts bio-friendly metal – and invisible support that makes his jewels come alive.
The Armory show, never strong in Asian art, is strikingly weak in its offerings this year. After all as these new sponsors insist on reminding us TEFAF is short for The European Fine Art Foundation. (They simply ignore American work.) They have more than made up for this by welcoming Wallace Chan Chan committed to carving gemstones at 17 in 1974. In 1987 he invented the Wallace Cut illusory carving technique. He immersed himself in Buddhist art for a decade starting in 1991. Chan also spent 8 years to experiment with titanium, the most bio-friendly metal known to date. He surprised Baselworld 2007 with a series of jewelry creations featuring ethereal titanium structures, the technical secrets of which he later unveiled to the world. In 2012 and 2014, he emerged at the Biennale des Antiquaires in Paris as the first and only Asian artist ever invited to exhibit at this fair. In 2015, Wallace Chan has his solo exhibition at the Hong Kong Convention and Exhibition Centre, invited by Christie’s. His very first limited edition illustrated monograph Dream Light Water is published by Rizzoli.
In 2016, Wallace Chan became the first Chinese jewelry artist invited to exhibit at TEFAF in Maastricht. He made another debut at Masterpiece, London the same year – delivering a 1-hour talk at the Victoria & Albert Museum. After that he delivered a dialogue with the Jewelry Curator of Museum of Fine Arts, Boston at the Hong Kong Book Fair. Now he caps off 2016 with his first exhibition in New York at the Park Avenue Armory TEFAF show. Here’s his masterpiece sculpture – an art extravaganza. 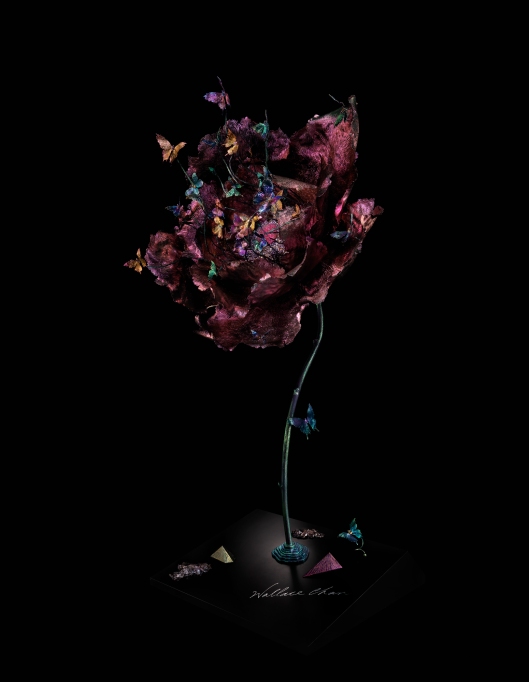 Like Loading...
Thursday’s preview via the Art Walk sponsored at fifteen of NYC’s UES galleries was simply jaw-dropping. Clear your midday calendar for Friday to make way for an art adventure – and a treasure hunt. And make sure you make it to the Armory Art & Antiques show this weekend to see what an additional 85 dealers have to offer.
We only made it to five of the fifteen galleries but our reward was a truckload of surprises delivered with glasses of proseco and champagne – and doses with more art expertise than I’d ever expected to experience even in this world capital.
What gallery dedicates one entire blacked out room with a single spot on its Bernini? Reveals its cubist delights with casual aplomb? Beats you over the head with art masters without mercy? The fifteen galleries who dared create an Art Walk this last Thursday, that’s who.
I returned to my writing desk at a total loss as to how to describe what I’d just witnessed. An art mashup of art from ages past made all too fresh, all too available. Watch those checkbooks this weekend as you wind your way through the Armory – the TEFA show promises to be a moveable feast if Thursday’s appetizers are any indication.
If fifteen of New York’s finest can have such impact can the Armory show match this? If it can, and it probably will, we have all benefited from a changing of the guard at the armory – for as I described in a previous post its management has changed. Fresh blood and very old distinguished art promises to sweep away all minimal expectations borne of years of past disappointments. Now in light of the Art Walk I ask myself, “What incredible delights away us in the newly refurbished second story rooms of the Armory?”
All I can say is go first to the galleries that shared such delights this last Thursday evening. That may lessen the shock that promises to await you at the Armory show this weekend. Art Fest is an understatement. An Art Extravaganza is about to take control over this weekend’s shallow entertainments and customary pleasures.
Go and enjoy with an open mind – and watch open mouthed at the buffet of art about to unfold – with amazement and gratitude. Be prepared to be pleasantly astonished. If only 15 galleries of NYC’s finest can produce such incredulous treasures what can possibly await you at the Armory? I for one cannot wait.
The Armory show will probably be Art Tourism at its very best. But Thursday’s Art Walk on the UES is a not so gentle reminder that New York’s everyday fare is rich indeed. And that we are so lucky to have it that way, every day – long after the Armory show shuts its doors. These 15 galleries have thrown down a gauntlet: how can the other 85 match it? Only the next few days will tell that story – one I wait for with baited breath…. breath well baited by Thursday’s tasting menu.

Fifteen of the city’s preeminent galleries—all clustered on the Upper East Side—are hosting simultaneous opening-night receptions as a new, companion event to Tefaf. Called October Art Week, these 15 opening night receptions will occur on Thursday Oct. 20 from 5-9pm. Eight of these receptions will be in the mid 60s and seven in the 70s through 84th Street. All are open to the public – and comfortably walkable from one another.

The occasion? From Oct. 22 to Oct. 27 Europe’s biggest (270 exhibitors) and most prestigious fair – the Tefaf in Maastricht – a huge fair going on now for nearly 30 years, devoted to art, antiques, and design is expanding into New York.

Organized under the European Fine Art Foundation this first Tefaf fair will replace the New York City Armory’s previous international fine art and antiques show. Unlike its predecessor, with nearly 100 exhibitors it will expand beyond the cavernous drill hall into period rooms on the 1st and 2nd floors – rooms recently restored by Swiss architects. It also will focus on high-end modern art and design whereas a companion fair – Tefaf New York Spring – will focus on art & antiques in the May 2017.

Christie’s has moved their sale dates to coincide with the Tefaf fair. Sotheby’s, too, is holding their private selling exhibitions of Old Master Paintings during the week.

Bria Koser, director of Otto Naumann Ltd. who with Lydia Johnson, director at Robert Simon Fine Art and Frances Beatty, president of Richard L. Feigen & Co., came up with the concept of having local galleries complement the international show: “With the opening of TEFAF New York, we thought it was the perfect time to launch October Art Week.  TEFAF draws the world’s foremost collectors and curators.”

New York’s UES Art Week draws on the concept of London Art Week. “The UES is well positioned to host a similar event, because of the rich concentration of fine art galleries in proximity to the Armory,” says Johnson.

Indeed TEFAF and the Christie’s and Sotheby’s auctions are but the tips of the art iceberg. The 15 participating galleries in Art Week – several of which are exhibiting at Tefaf – will offer in-depth opportunities for visitors to dig deep. The limited space for each exhibitor at the Armory allows only a cursory acquaintance with each exhibitor’s offerings. Also, faced with nearly 100 of the world’s greatest exhibitors  Fair Fatigue is also a very real danger at these big lumbering traditional Art Fairs.

Being able to visit 15 top New York galleries nearby not only eliminates the Carpetbagger smell of the TEFAF show and but gives visitors a chance to sample the field in depth – and walk a block or two between each one. The Art Week folks offer an easy to use map: http://www.octoberartweek.com/art-walk-map/. A list of the firms follows this review. Note that it is conveniently ordered geographically from the 80s to the 60s.

The TEFAF New York Fall Armory show conflicts directly with the FIAC art fair in Paris – and both focus on modern and contemporary art. It also follows just two weeks on the heels of the Frieze Masters London show. But when all is said and done, NYC is a lot easier to get to than Paris or London. And the prior location, Maastricht, in the NL – is well over two hours south of Amsterdam and on the border with Belgium. Maastricht is indeed one of the most attractive cities in NL but any Dutchman will tell you it’s far from everywhere.

No wonder Tefaf – which failed in its bid to do a Tefaf fair in China recently – is glad to be finally in NYC. Even so, the Tefaf NY Spring Armory Fair scheduled for May 4 to May 9, 2017, will have to compete with NYC’s Frieze fair – – which already has captured the world’s high-end contemporary art dealers. And it is noteworthy that none of the mega-galleries like Gagosian, Hauser & Wirth or David Zwirner were at Maastricht in March 2016. The art world has never been known for its organization or coordination.

This is a good time to remember to use NYC’s two incredible online resources to flesh out this moveable feast of art, antiques and design: ArtCards.cc and http://www.LarryQualls.blogspot.com.

ArtCards, the brainchild of its publisher Morgan Croney, lists upcoming events, talks and art openings for the next 7 days, organized geographically for ease of use by neighborhood, street, street number – and even suite number as in the case of Crowded Chelsea. These are usually mid-level events open to all. You pick those you wish to visit – and ArtCards lists and maps them for your smart phone. They do this in these cities:San Francisco Los Angeles Miami BerlinLondon. An incredible resource.

Larry Qualls publishes his Art & Design Events blog each morning. It too is organized geographically. It offers significantly superior events – including some requiring RSVPs and those requiring a modest entrance fee. To understand Larry’s significance on NYC’s art scene check out his profile on Wikipedia. He was a NYC editor and art critic for decades, one whose library of images (the “Larry Qualls Archive”, 100,000 images documenting 30 years of New York City gallery exhibitions) was acquired by ARTSTOR. Between the quantitative and easy to use coverage of ArtCards and the qualitative coverage of Larry Qualls you can’t go wrong – and you’ll end up getting a first class education on the NYC art scene. . . a perfect preparation for Tefaf, Art Walk, and the auction house sales from Oct 20-27.

Here are the ART WALK GALLERIES offering an open house Oct 20 from 5-9pm: